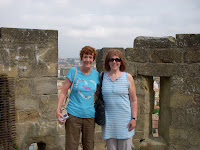 Well today we are off to Carcasssone, I found a nice website even with a little video here. You can see the rest of my pics here. Basically old Carcassone is a walled city with the castle overlooking the new Carcassone. People actually live in the walled city, there are lots of restaurants, shops, hotels, et. Wikipedia says this about Carcassone "

First signs of settlement in this region have been dated to about 3500 BC, but the hill site of Carsac – a Celtic place-name that has been retained at other sites in the south – became an important trading place in the 6th century BC. The Volcae Tectosages fortified the oppidum.

Carcassonne became strategically identified when Romans fortified the hilltop around 100 BC and eventually made it the colonia of Julia Carsaco, later Carcasum (the process of swapping consonant is a metathesis). The main part of the lower courses of the northern ramparts dates from Gallo-Roman times. In 462 the Romans officially ceded Septimania to the Visigothic king Theodoric II who had held Carcassonne since 453; he built more fortifications at Carcassonne, which was a frontier post on the northern marches: traces of them still stand. Theodoric is thought to have begun the predecessor of the basilica that is now dedicated to Saint Nazaire. In 508 the Visigoths successfully foiled attacks by the Frankish king Clovis. Saracens from Barcelona took Carcassonne in 725, but King Pippin the Younger drove them away in 759-60; though he took most of the south of France, he was unable to penetrate the impregnable fortress of Carcassonne."